Bijou Thaangjam is a multifaceted personality known as a chef and actor. He is also known as lyricist and an art director who hails from Imphal, Manipur. He was a contestant of popular cooking show MasterChef India season 2. Bijou also play noted character roles in Bollywood films and TV shows. He is best known for playing the brief role of Naobi in the biopic -Mary Kom starring Priyanka Chopra. After this film, he got numerous offers from movies and television, and now a series of movies are lined up for release. His full name is Thangjam Biju Singh. He was born of 24th March 1986 in Imphal, Manipur. Bijou has two younger siblings. He schooled from Tiny Tot’s Unique School, Imphal and completed his graduation from Bangalore University. Since young he has been interested in cooking and acting, later he excelled in both these forms of art. He appeared in MasterChef India season 2, where he finished as one of the top 50 contestants. He also appeared in the reality show UTVStars Superstar Santa. He moved to Mumbai in 2012 to pursue a career in acting. In 2014 he bagged his first Bollywood film, Mary Kom. Later many other more films like Shivaay, Jagga Jasoos, Paltan, Happy Phir Bhaag Jayegi, Vodka Diaries and III Smoking Barrels. Now he will be seen in a few more films – Robinhood Ke Pote, Penalty, Karma Cafe, Rocketry- The Nambi Effect etc. He played a supporting role of Karma Wangchuk’s brother in youth oriented series on Channel V – Dil Dosti Dance. He essayed a brief role of Joseph in MTV’s show- Traffic. He was also seen in- Code Red aired on Colors TV. He was last seen on Altbalaji original series- The Test Case, playing a role of Indian Army as Tej Bahadur Thapa- a Jawan from 3GR. 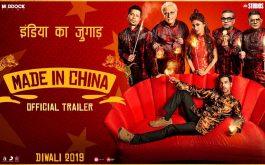 Trailer: Made in China